All over the internet the big tech blogs like Mashable, Engadget and TechCrunch are all railing about the Twitter stock drop and it’s gotten my clicks too.  I’m sure my average time spent on site with an entry page on that topic is over 2 minutes so why not post feverishly about it.  Everyone is reporting that twitter’s stock dropped 10% but what does it really mean, what does a 10% Drop in Twitter stock say about twitter?  is it a failing social network, is it a niche social network, is twitter’s fail whale about to go up permanently?  Let us peer deep into the abyss, you’ve been warned.

“And when you gaze long into an abyss, the abyss also gazes into you” – Friedrich Nietzsche

What “They” Worry It Means

When I say “They” with the capital T, I’m not talking about Twitter users, most likely it’s exact opposite.  I’m talking about the people who own twitter, or a chunk of it now that it’s a publicly traded company.  I’m sure many of these people purchased the stock because it’s a product they believe in, but I’m sure most of the large investors are, infact, investment companies that made a call. 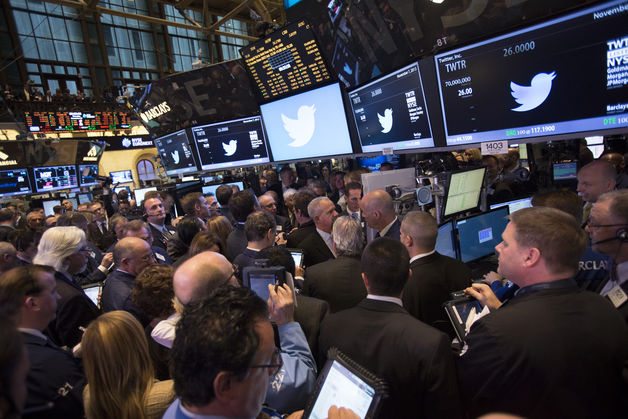 Meat heads gather around computer screens to marvel at a pseudo video game they believe they’re a real part of.

What They are worried it means is that Twitter is a niche website.  The scandal of the stock drop centers around user growth, the amount of additional active users.  In case you’re wondering Twitter defines an active user as someone who uses the platform more than one time per month.  They say that twitter isn’t taking on active users fast enough.  They’re worried the social network is about to flatline like we’ve seen, Pinterest maybe, definitely mySpace.com.  Remember that!  Who’s in your top 8!  ;P

What It Does Mean

What it really means is that revenues were good enough to eclipse a slow in user growth.  I don’t think that Twitter users are going to abandon the platform.  There isn’t anything else like it, everyone is on it, and it’s cool.  I enjoy Twitter.   But monetizing the platform is poses new challenges for marketers, companies and all kinds of individuals who are looking to promote themselves.  Twitter is tied up in the Millennial lifestyle.  This generation understands advertising, they’ve grown up being trickly marketed to.  They’ve adapted tougher skin and a keen eye for the visual queues that stink of corporate pandering and ingenuine attempts to identify with our ideas as a group.

Twitter will still be a valuable way for small businesses, large business and individuals to marketing themselves to others.  They’re just having a hard time SQUEEZING money out of advertisers, who are sceptical about the value of basic user engagement, like a re-tweet and aren’t really sure how that translates into cold hard dollars rolling into their businesses.

Part f the problem lies in the winding road of content marketing and how modern companies need to build report with individual consumers, because of their sophistication, before that individual every considers making a purchase or doing business with a company.  Now companies need to publish real things, not just ads, and engage individuals like they were real people.  A big problem for big business.

They’re having a hard time making money fast enough with the things this generation loves. Poor them.