Social Media and The People who Use it

A CNN.com article “Myspace Users (what’s left of them) are more open minded, study says” by Mark Milian touches on what has befallen the social networking platform Myspace, which I gave kudos to for the site redesign a year or so back.  I might take that back after looking at the design nightmare their current hompage seems to be today (it’s a very flexible page, they can’t all be winners I guess).

Apparently their user ranks have been dwindeling (who knew) since the rise of social networking giants like Facebook & LinkedIn.  One of the key peices of data Mark keyed me into in this article was that when working from a business/marketing perspective:

“Users of those services are no more likely to consider alternative points of view than people who don’t use those sites or who don’t log onto the Internet, according to the report from the Pew Research Center.”

I wondered what that said about social media marketing.  I suppose at its heart it simply means those social network platforms are just as good as any to try and reach people.  Saying they’re “no more likely” seem to simply imply the playing field is level.  What is interesting is the possibility of reaching groups that are open minded.  In the case of Myspace you’re going to reach a certain demographic.  t says that maybe the Myspace user tends to be more urban, not supprising considering all the blinged out profiles on the site… one of the few “perks” to having a myspace page… if you want to call it that… from a design perspective it seems like a nightmare.  😉 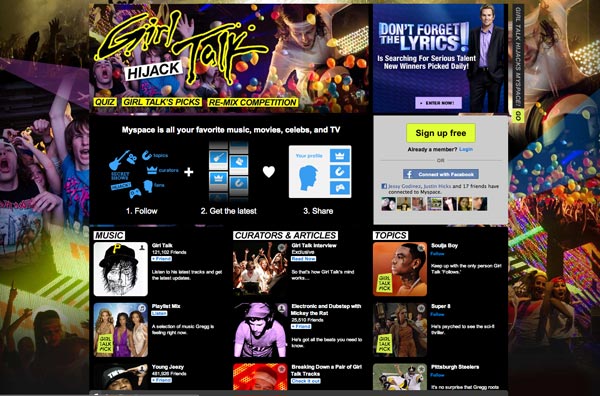 If this doesn’t have urban – inner city – pre-teen appeal… I don’t know what does.  What I got from all this is choose your poison and look at your position.  If you’re in a position where you’re targeting and marketing urban individuals myspace might still be a good avenue to reach your core audience.

We can’t write off a social networking site because it’s fallen out of favor (in our own minds).  From my perspective, just because I don’t use MySpace, doesn’t mean the people who do use it wouldn’t enjoy the designs I produce.  Similarly, the small mom and pop or privately owned shops what sell items target at pre-teens, current fashion, trends, etc. might have a more “open mind” toward what they have to say in the context of MySpace.